Employee Equity – the Credit Cards of the Venture Community 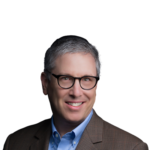 When hiring venture executives and employees, the buzz centers around equity. For successful ventures, these equity rights, often issued when the equity is worth pennies a share, hold the potential of delivering great wealth to those fortunate enough to receive them. However, there is an often ignored drawback to equity compensation – simply stated, it is the credit card of the venture world. As opposed to salaries which directly impact budgets, equity grants are “painless” and only on the exit of the venture does the true cost of the grants become apparent.

The painlessness of equity grants makes it a very tempting compensation tool for cash-strapped early stage startups. Putting aside potential minimum wage issues, these ventures often risk making outsize equity grants to employees who, while important in the short term, will not have a significant impact on the company long term. Many ventures fail to recognize that equity needs to be budgeted and, as a result, “spend” too much too early on, leading to issues where they need to make additional grants to round out the leadership team and make other critical hires. For university spinouts that often need to hire a large part of their future executive teams, mistakes in early equity grants can unnecessarily dilute founders’ and university’s common stock positions.

To understand the impact of dilution of a founder’s stake, below is a hypothetical ownership summary that reflects typical ownership through financing rounds and how the dilution plays out. As is clear, while the nominal value of the founder’s stock is increasing, even in a successful venture, the founder’s ownership percentage declines steeply as a result of dilution. In the hypothetical, the company has raised a total of $41 million in four funding rounds.  Each of the funding rounds represented an “up round” where the pre-money represented a significant increase from the post-money valuation of the prior round. Yet the founders’ share dropped from 30% to 12% – in other words, a smaller piece of a larger pie. 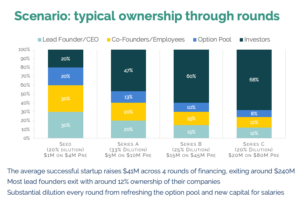 The average successful tech startup exits for $240M after a series of raises totaling approximately $40M of capital. This amount of capital is typical of the industry, and it is distinct from the need to refresh the startup’s option pool across each financing. The purpose of raising capital can be evaluated across three categories that fuel a startup engine into wild success: 1) value inflection, 2) employee compensation, and 3) growth. Venture investment is a double-edged sword: by accepting investment, a founder loses control and ownership; but without investment that same founder cannot feed the engine that creates value. Driving a startup through a value inflection point can be achieved through both quantitative and qualitative milestones, but it should be simply thought of as the means by which a $1M investment can create a large valuation uptick in a subsequent fundraising round. In most companies, employee compensation is the largest expense, and certain skillsets and geographies garner surprisingly high salaries. Lastly, fueling growth with investment capital is the tool that allows companies to expand their team, footprint, facilitation, and marketing.

In the typical funding and exit described in the hypothetical, the founders, founding team, and employees were diluted over time. While 12% of a $240M exit is a definitively life-changing event, the path to even larger personal upside can only be achieved by reducing dilution and increasing valuation. The dilution equation is simple ($-raised/$-valuation), but the implications of driving the numerator to $0 or the denominator to unicorn-status is much more nuanced. When founders are building their cap tables, they should think about how taking more dilution will ultimately create a bigger pie to take a slice of down the road.  For founders and their university tech transfer partners, this dilution can be exacerbated by poor choices in equity grants to employees.

Ideally, employee compensation should address three goals – recruitment, performance and retention.  When on-boarding employees, ventures have several economic “levers” at their disposal, each of which serves as a different form of incentive.  While the true cost of equity grants is often differed to exit, ventures should balance these levers to achieve the goals of compensation, while minimizing the size of dilutive equity grants.  A company’s primary levers are:

Equity grants can take several forms, the most common forms are[1]:

Below is a chart that describes each form of equity grant in greater detail.  Options are the most common form of incentive for venture-backed companies.  However, when company valuations are still low, restricted stock awards offer certain tax advantages.  Restricted Stock Units tend to be granted more frequently by later stage companies.   There are several concepts that apply to all equity grants:

Although there is no legally required vesting structure, the most common vesting structure is known as “4 years with a 1 year cliff.”   Under this structure, the shares remain unvested until the first anniversary, when 25% vests.   The remaining 75% vests in equal monthly installments over the following three years.   In situations where the employee has already worked a significant period of time before the grant of equity/options, a portion of the grant may be fully vested immediately.

So, how should a university startup allocate equity across its founders? Here is a breakdown of the typical initial founder’s split in a physical sciences company. 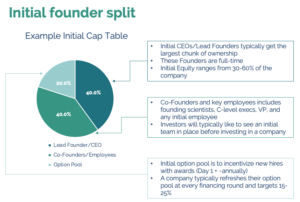 Here is a more detailed breakdown of typical pre-financing equity compensation per employee level for a university spinout. 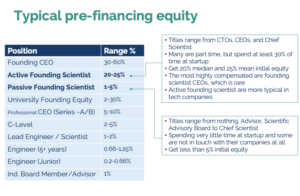 What is most noteworthy about this chart is the relatively small grants given to employees below the C-Suite level.  These ranges should be kept in mind by ventures making grants to early hires.   Even if a web designer is critical to the initial success of a venture and is willing to work for below-market wages, the individual has skills that in most cases are easily replaceable in the future.  As a result, a grant of even .2% equity may be over-generous and unnecessarily deplete the equity budget.

On the other hand, the chart makes it clear that not all members of the management team are created equal.  In most startups with two to four founders, there is often one charismatic leader that should be incentivized with a disproportionate share of equity. This Lead Founder/CEO typically receives the largest chunk of ownership, around 30-60%. If there is no CEO or lead in place, part of this piece would be set aside for a CEO who is brought on later. Co-founders and other key employees such as founding scientists, C-level executives, VPs, and initial employees should share in approximately 40% of equity allocation. The remaining ~20% option pool should be preserved for future hires.  At each round of financing, the option pool should be refreshed (dilution!) to 15-20% until a full C-Suite has been hired. Employee options are issued throughout the lifecycle of the company to employees to fight against dilution.  It is challenging to maintain employees at a high equity level throughout the course of a startup, as there are few instances where you can significantly top off an employee’s equity piece.

What is the value in having a founding scientist on the team and on the cap table, especially if his/her involvement would be limited?  Once the founding scientists return to the university, their time is best spent on strategic efforts like hiring, R&D, or broad business relationships; assigning an operational role to a part-time employee would be unrealistic.

Keeping a founding scientist on the cap table not only allows access to new developments in that lab in the related space, but more importantly to a pipeline of students from those labs. In addition, founding scientists often have high research connections with major companies that will trigger research collaborations and/or commercial agreements for the startup. An affiliation with the university and high-profile researcher can help the company with fundraising and customers as well.

Startup compensation is not a one-size-fits-all proposition.   It depends on many factors such as the financial situation of the venture and its future financing needs, the market for talent in which it competes and the prospects, real or perceived, of the venture.   What founders and other holders of common shares, such as tech transfer offices, need to keep in mind is that similar to credit card debt, poor use of equity has a cost – most of it borne by the common shareholders.   Ventures should use all compensation tools at their disposal that creates the right balance of incentives and current versus future costs.

[1] All the forms of equity grants described are relevant to corporations. However, there are counterpart, largely equivalent grants for companies set up as limited liability companies.

[2] All but the earliest stage ventures should seek third party valuations (often call “409A Opinions”) to support their determinations of the fair market value of the stock.