CA AG Gets Aggro Over False Claims of Bottle Biodegradability 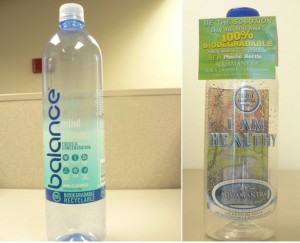 The good folks at the Huffington Post last week reported that California Attorney General (AG), Kamala Harris, filed a lawsuit on October 26, 2011 against ENSO Plastics, Balance Water and Aquamantra for making the alleged greenwashing claims that their bottles are “100 percent biodegradable and recyclable.  “Such claims violate California law, specifically California AB 1972, which prohibits the sale of plastic bags, and plastic food and beverage containers that are labeled as “biodegradable,” “degradable,” “decomposable.”  AB 1972 was signed into law on September 27, 2008 by then-California Governor Arnold Schwarzenegger and became effective on January 1, 2009.  Recently, California Governor Jerry Brown signed California Senate Bill 567 into law, which expands AB 1972 to banning the terms “biodegradable,” “degradable,” “decomposable” from use on all plastic products sold in California starting in 2013 (manufacturers take note!).  Additionally, CA Business and Professions Code Section 17580.5 makes it unlawful to violate the FTC Green Guides, about which I wrote here, here, here, here, here, here, and here (yeah, I’m kinda passionate about responsible business and responsible marketing; can you tell?).

According to the press release issued by AG Harris’ office, the lawsuit is a “first-of-its kind ‘greenwashing’ lawsuit against three companies that allegedly made false and misleading claims by marketing plastic water bottles as ’100% biodegradable and recyclable.’”  According to an Associated Press article, defendants Balance Water and Aquamantra said, “They were disappointed their companies were targeted when they’ve worked hard to do something good for the environment.”  The thing is it really doesn’t matter how good you’re trying to be, you must make sure that your advertising claims meet state and federal laws and guidelines.  In this case, these manufacturers had an obligation to know California law since they were selling products there, especially Aquamantra, since it is a California corporation with its principal place of business in Dana Point, CA.

The AG’s complaint asserts that the defendants’ 100% biodegradability claims are “false, deceptive and misleading to consumers because the plastic bottles will not biodegrade as claimed, either in a landfill or any other environment.”  The complaint also states that, “The claim of recyclability on these bottles is deceptive and misleading to consumers,” because, “the bottles are made by adding a specially formulated microbial additive to standard PET plastic and items containing degradable additives are considered contaminants by postconsumer plastic recyclers and, where possible, such items are culled out from recyclable plastics.”

At a minimum, you best be sure your claims of environmental benefit meet the appropriate generally accepted standards.  For biodegradable plastics, the ASTM Standard Specification for Biodegradable Plastics (ASTM D6866-11) is one option.  However, even compliance with a reporting standard will not relieve you from knowledge of the law.  If you’re going to tout an environmental benefit, you must first review and comply with the FTC Green Guides and any relevant state laws.

Ignorance of law is no excuse!  Don’t be afraid to retain counsel to help with this process; a few days’ worth of legal work upfront is a lot less time and money than needed to defend a lawsuit and/or re-brand.  Avoiding negative PR is an added bonus that easily can be achieved through proper due diligence.